Patrons of the Guild

In addition to St. Titus, patron of our parish, we take as patrons of the Knights of Columbus Woodlawn Council 2161 Traditional Latin Mass Guild the following saints depicted in the stained glass windows of St. Titus Church:

St. Edward, called the Confessor, the last but one of the Anglo-Saxon kings of England, reigned holily and happily for twenty-four years.  On the throne he rivalled the saints by his untiring practice of austere virtue; his reign was one of almost unbroken peace; the country grew prosperous, ruined churches rose under his hand, the weak lived secure, and for long ages after, man spoke of the laws of "good King Edward."  He died 5 January 1066.  The Saint's body reposes in the shrine in Westminster Abbey, behind what used to be the High Altar.  He was canonized by Alexander III in 1161. His feast is kept on 13 October, his incorrupt body having been solemnly translated on that day in 1163 by St. Thomas of Canterbury in the presence of King Henry II.


O GOD, Who hast crowned the blessed King Edward, Thy confessor, with the glory of eternity, make us, we beseech Thee, so to venerate him on earth that we may be able to reign with him in heaven.  Through our Lord.  (Collect, Mass of St. Edward.)

O God, who for the defense of the Catholic faith and the restoration of all things in Christ didst fill Saint Pius, Supreme Pontiff, with heavenly wisdom and apostolic courage: grant in Thy loving kindness that by following his teachings and examples we may attain eternal rewards.  Through our Lord.
(Collect, Mass of St. Pius X.)
We also take as patron St. Martin I, on whose feast day in the year 2007, our Guild was founded. 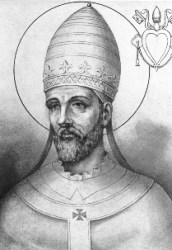 Saint Martin I
Pope, Martyr
Feast: 12 November
Pope St. Martin I suffered greatly in defense of the Faith.  By his zeal and energy he incurred the hatred of the Monothelites, heretics who denied that Christ had any human will.  So great was their influence that, after the plot to murder the pope was frustrated by Divine Providence, the holy man was dragged to prison.  From there he was banished to the Crimea, where he died in 655.  Although a Roman Pontiff, his feast is kept in the Greek Orthodox Church and in their Liturgy he is saluted as "The infallible and holy exponent of the divine dogmas."  His body was brought to Rome and buried in the Church of St. Sylvester.
O ETERNAL Shepherd, do Thou look favorably upon Thy flock, which we beseech Thee to guard and keep for evermore through the blessed Martin, Thy Martyr and Supreme Pontiff, whom Thou didst choose to be the chief shepherd of the whole Church.  Through our Lord.  (Collect, Mass of St. Martin I.)