Litany of the Most Precious Blood After Mass

After Mass, everyone is invited to join Fr. Cizik and the Knights of Columbus for an informal dinner at Harold's Inn, 2134 Brodhead Road, Aliquippa PA 15001-4671 (approx 4.5 miles/10 mins from St. Titus Church, nearer to the Hopewell Exit of I-376/formerly PA Rt 60).
Order off the menu and pay on your own.
Posted by Administrator at 4:00 PM No comments:

The Catholic Spirit of Christopher Columbus 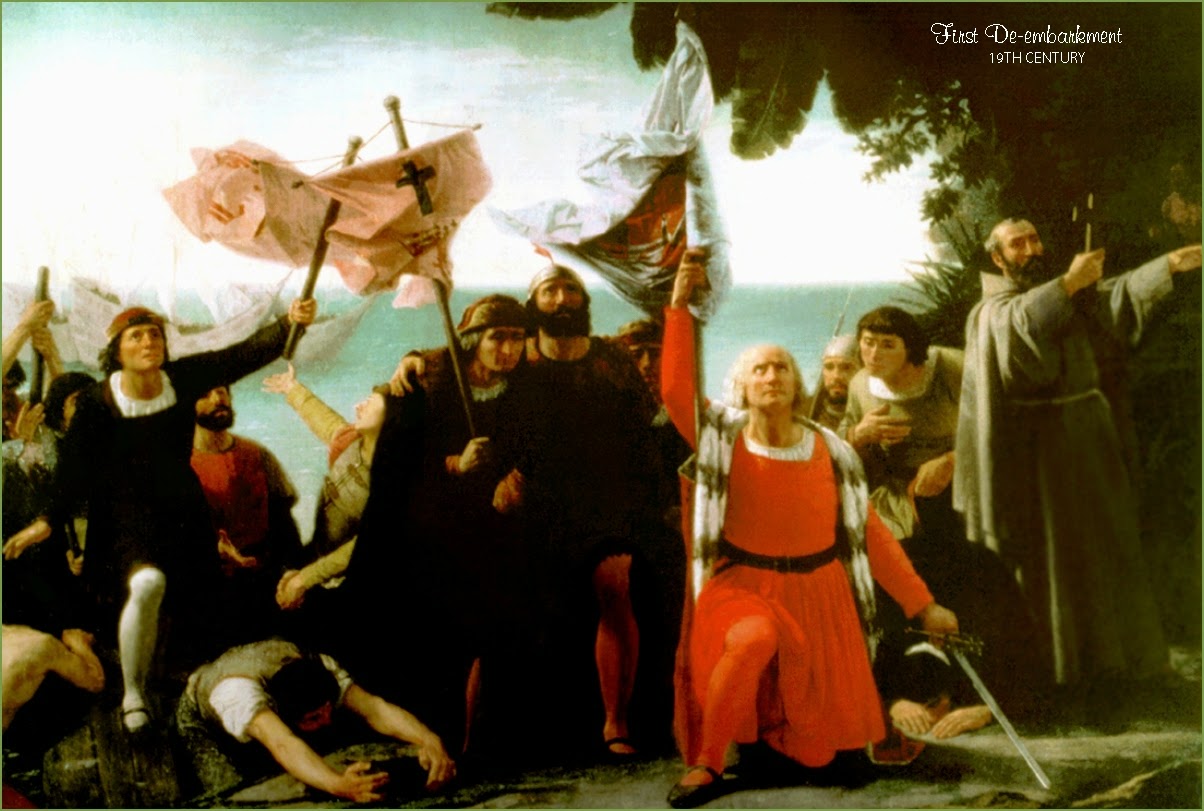 "As the sun set, the Salve Regina hymn rang out across the Atlantic. Ninety men stood on the decks of three boats, led in prayer by Christopher Columbus, the foreign captain they had come to trust. They had kept the same ritual of evening prayers since they left Spain months ago, but tonight was different. Tomorrow would be the Feast of Our Lady of the Pillar, Spain’s great patroness. Columbus had promised his men that had they not spotted land by her feast day, he would order the ships to turn back, a promise he intended to keep. He knew Our Lady would not abandon the enterprise he had worked so hard to bring about. The signs that they were near land were increasing by the day.

"As Columbus climbed the steps to his cabin, his gaze fell instinctively to the western horizon. Off in the distance, he caught sight of a light, like a candle rising and falling on the waves. Quickly, he called another man, who confirmed the sighting. The crews on all three ships were alerted, each man was on deck, peering out for signs of land nearby. At 2 a.m., the cry came out, “Tierra!” Land! The excitement of the crew was such that they hardly noticed the many hours it took to navigate the treacherous reef that surrounded their new destination. As Columbus knelt on the beach to give thanks, the following prayer rose from his lips:

“O Lord, eternal and omnipotent God, Thou hast, by Thy holy word, created the heavens, the earth, and the sea; blessed and glorified be Thy name; praised be Thy majesty, who hast deigned that, by means of Thy unworthy servant, Thy sacred name should be acknowledged and made known in this new quarter of the world.”

San Salvador
"The above prayer, recited in Latin and the first spoken in the Americas, was followed by the chanting of the Credo, the Te Deum, and many other prayers in thanksgiving. As the banners were unfurled, the admiral solemnly proclaimed, “In the name of Our Lord Jesus Christ…” He proceeded to claim the new land for his sovereigns, but not before first claiming it for his Divine Master, giving it the name San Salvador (Holy Savior)."

Read the rest here.  An excellent article on Christopher Columbus. 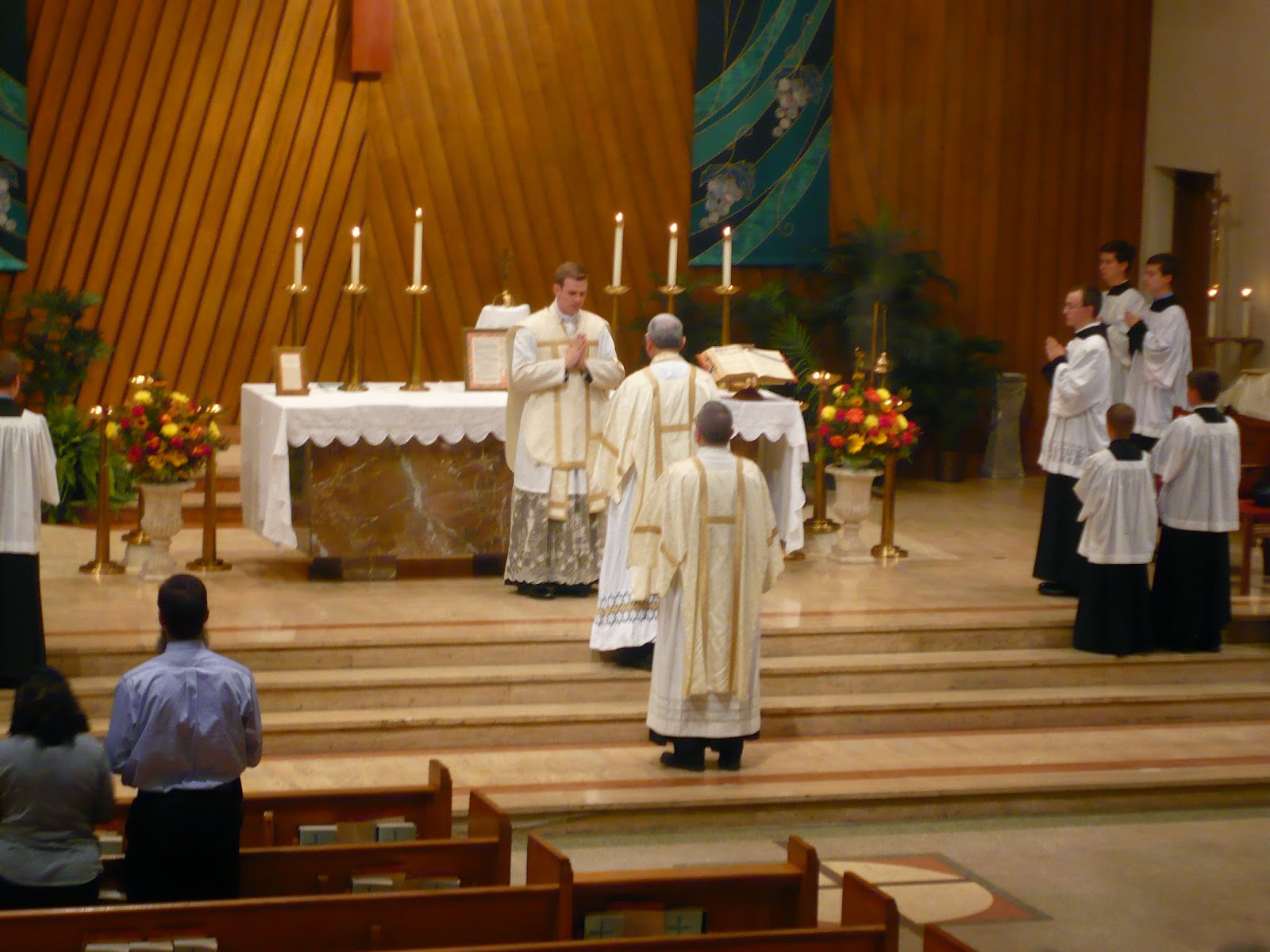 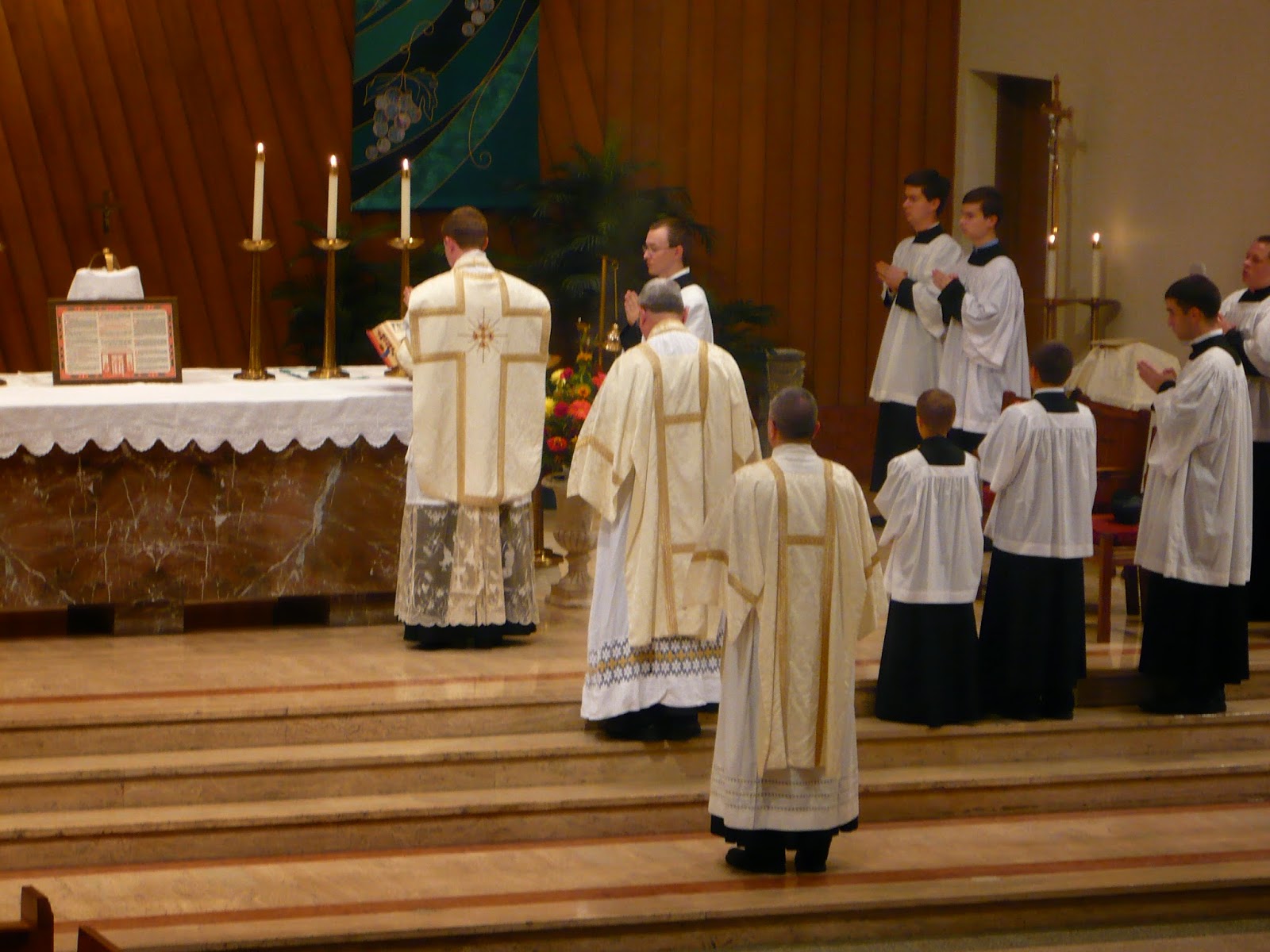 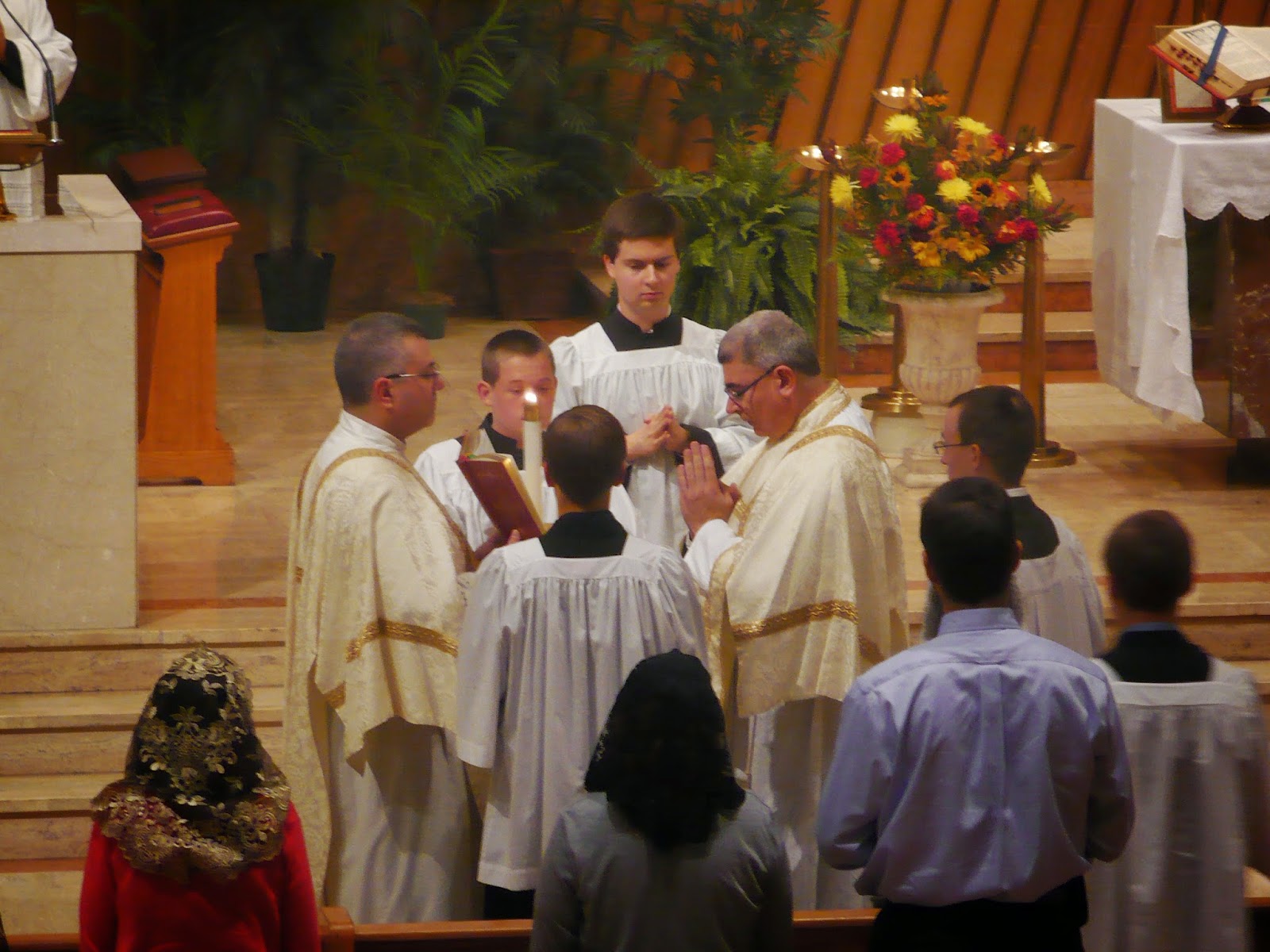 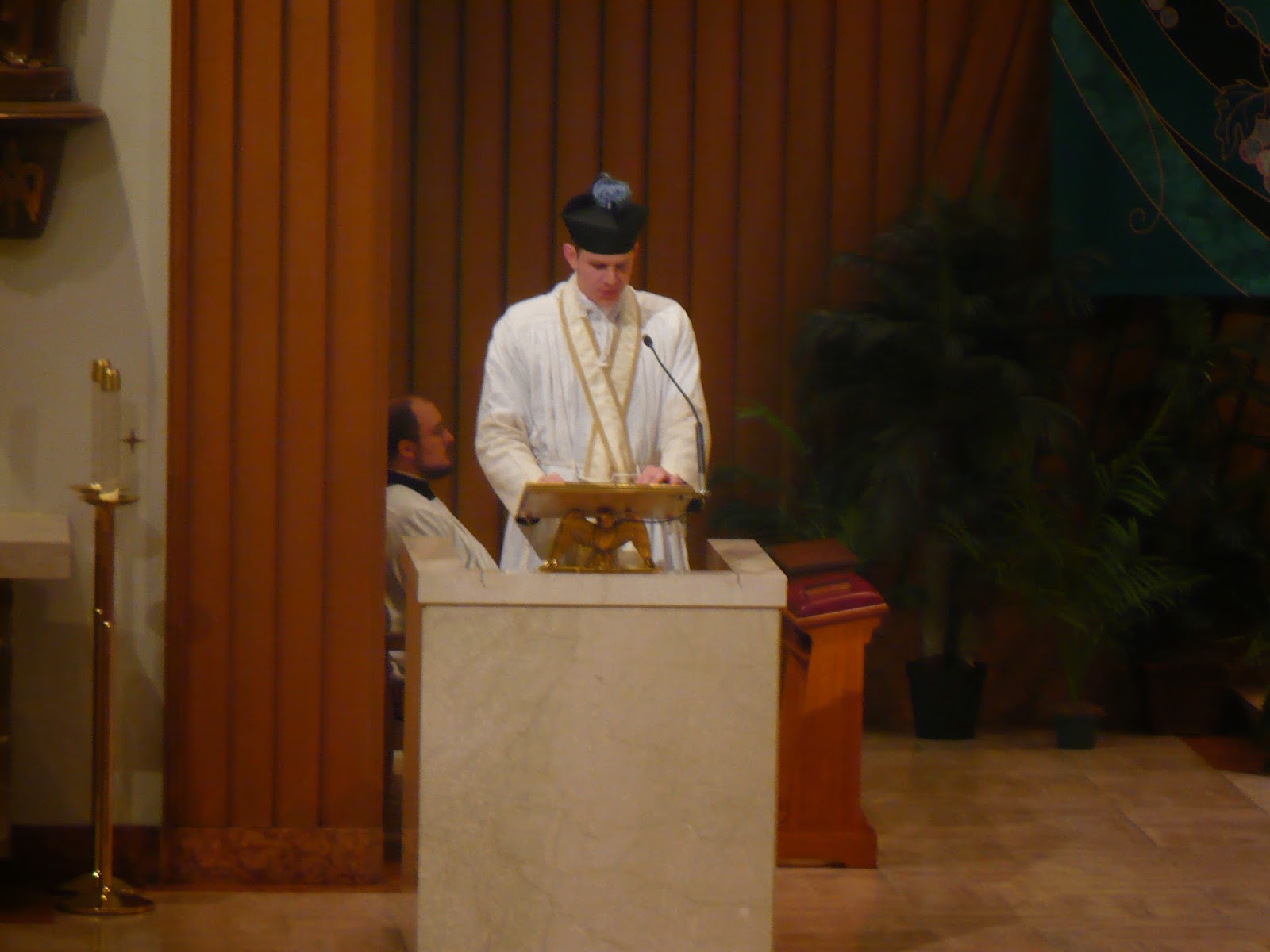 The celebrant was Canon Andrew Todd of the Institute of Christ the King Sovereign Priest. Canon Todd was ordained on 5 August 2014, in St. Louis by Raymond Cardinal Burke. 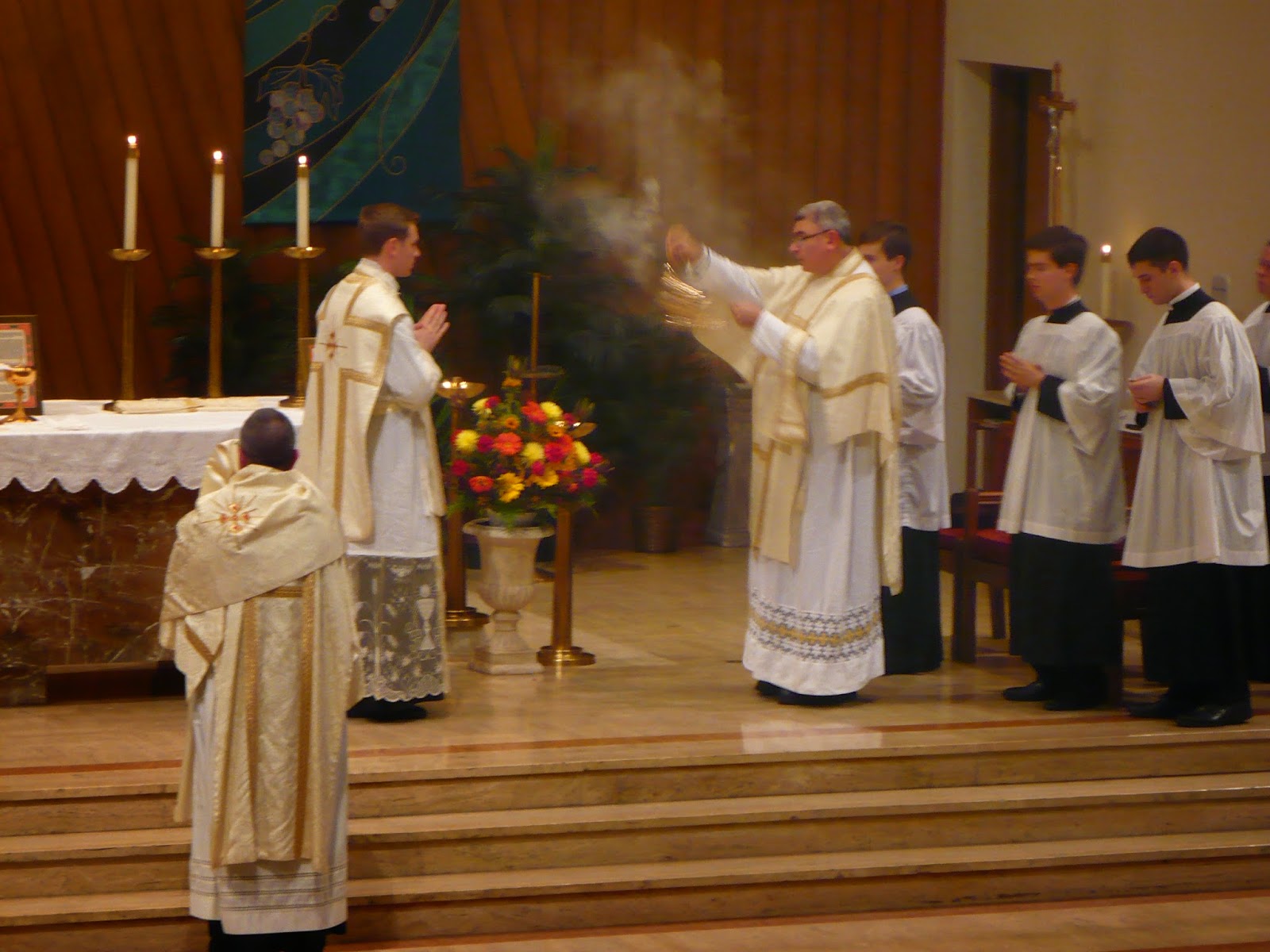 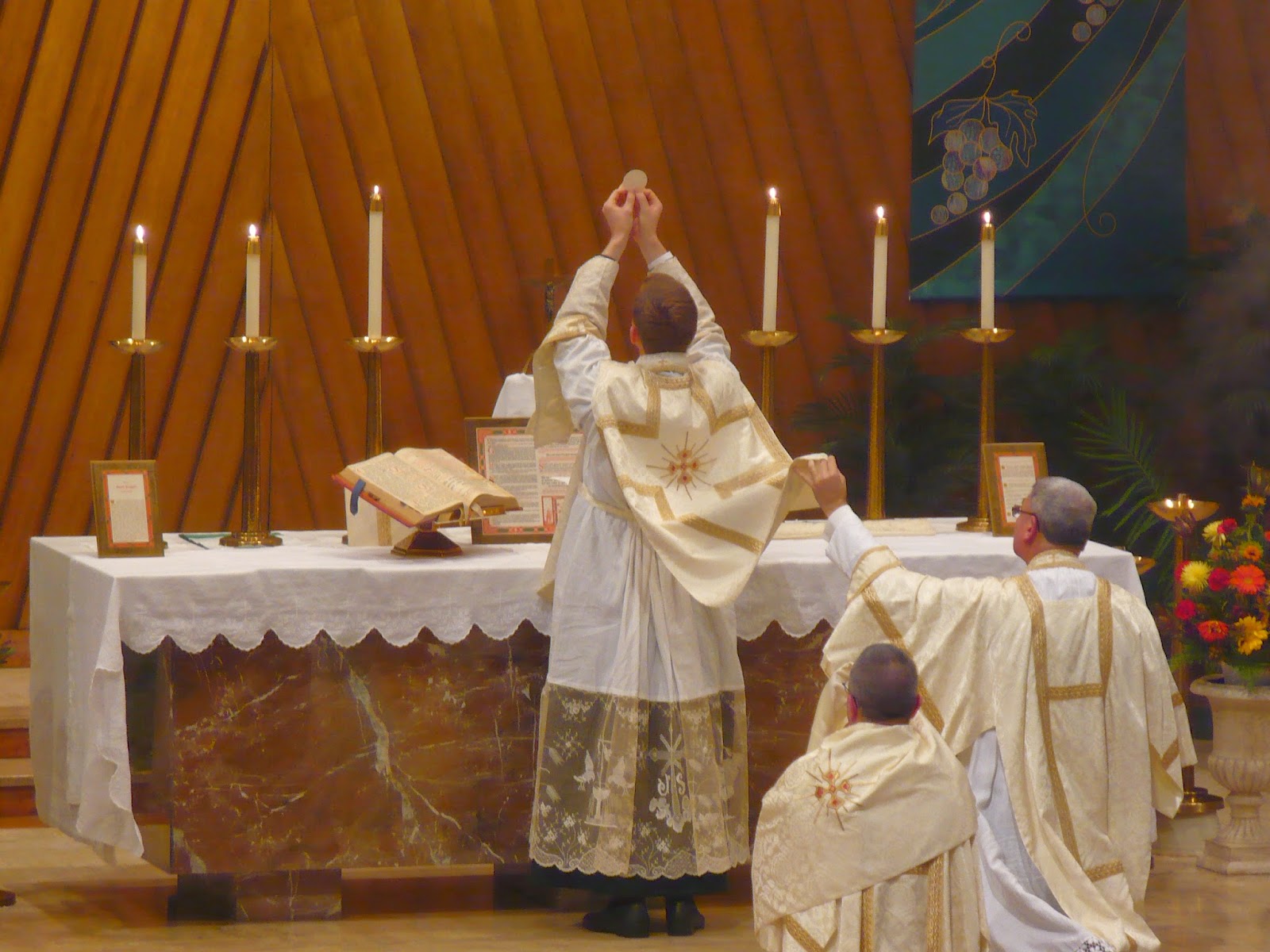 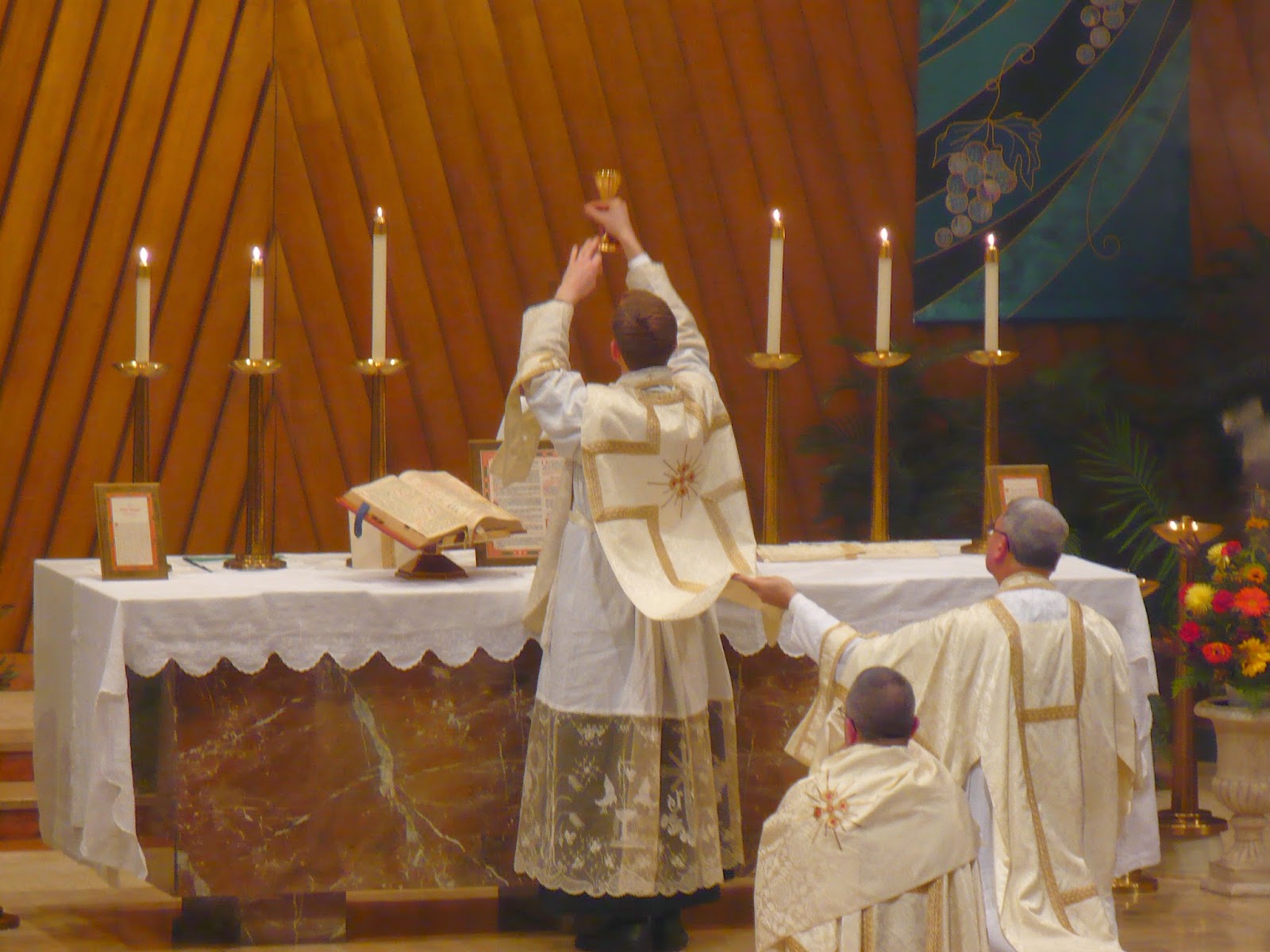 Music for the Mass was provided by the Duquesne University Schola Cantorum Gregorianum under the direction of Sister Marie Agatha Ozah, HHCJ, Dr. Ann Labounsky organist. 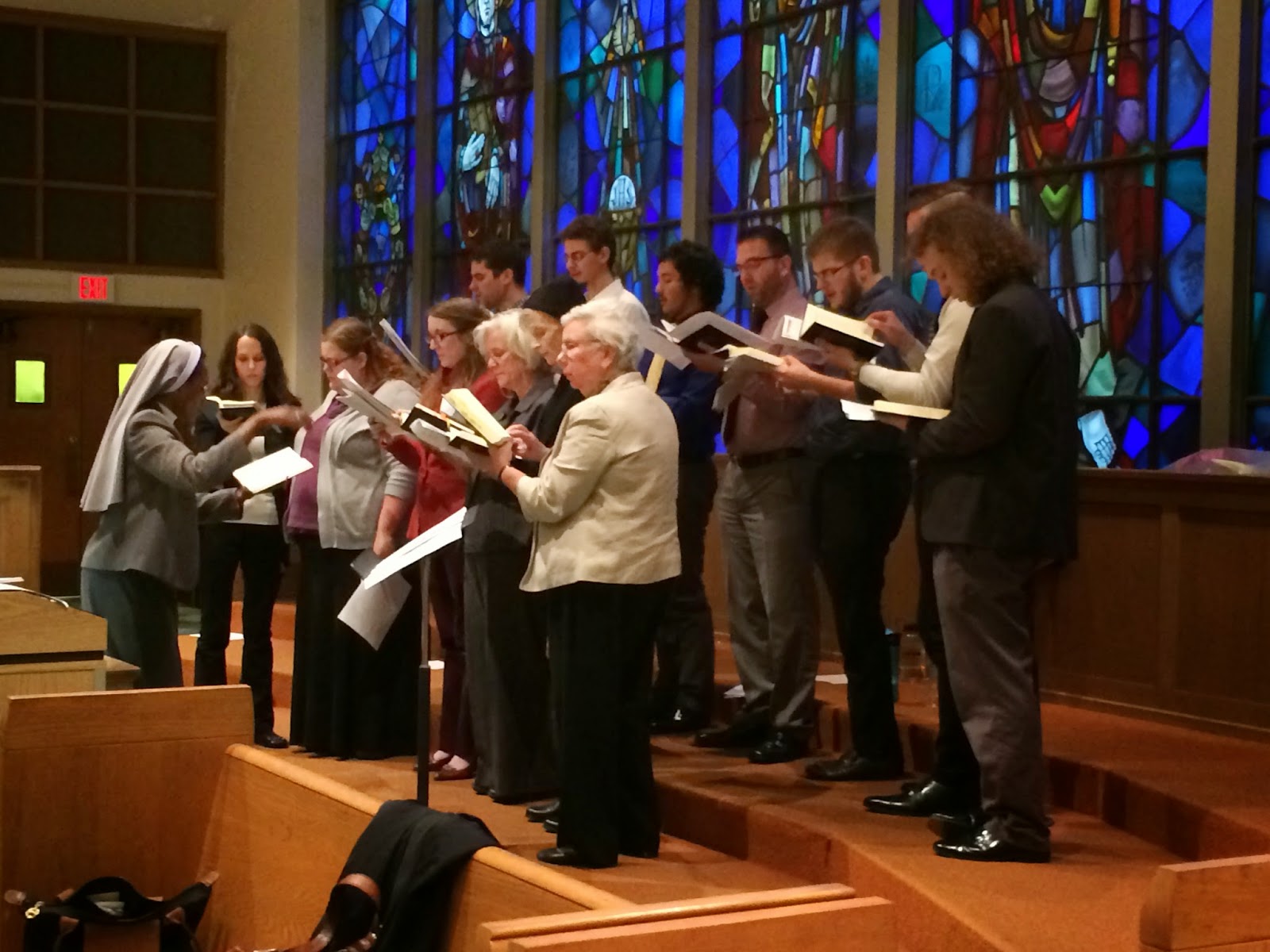 A Knights of Columbus honor guard was provided by members of the Fr. Baron Assembly 0939, Crafton, PA. 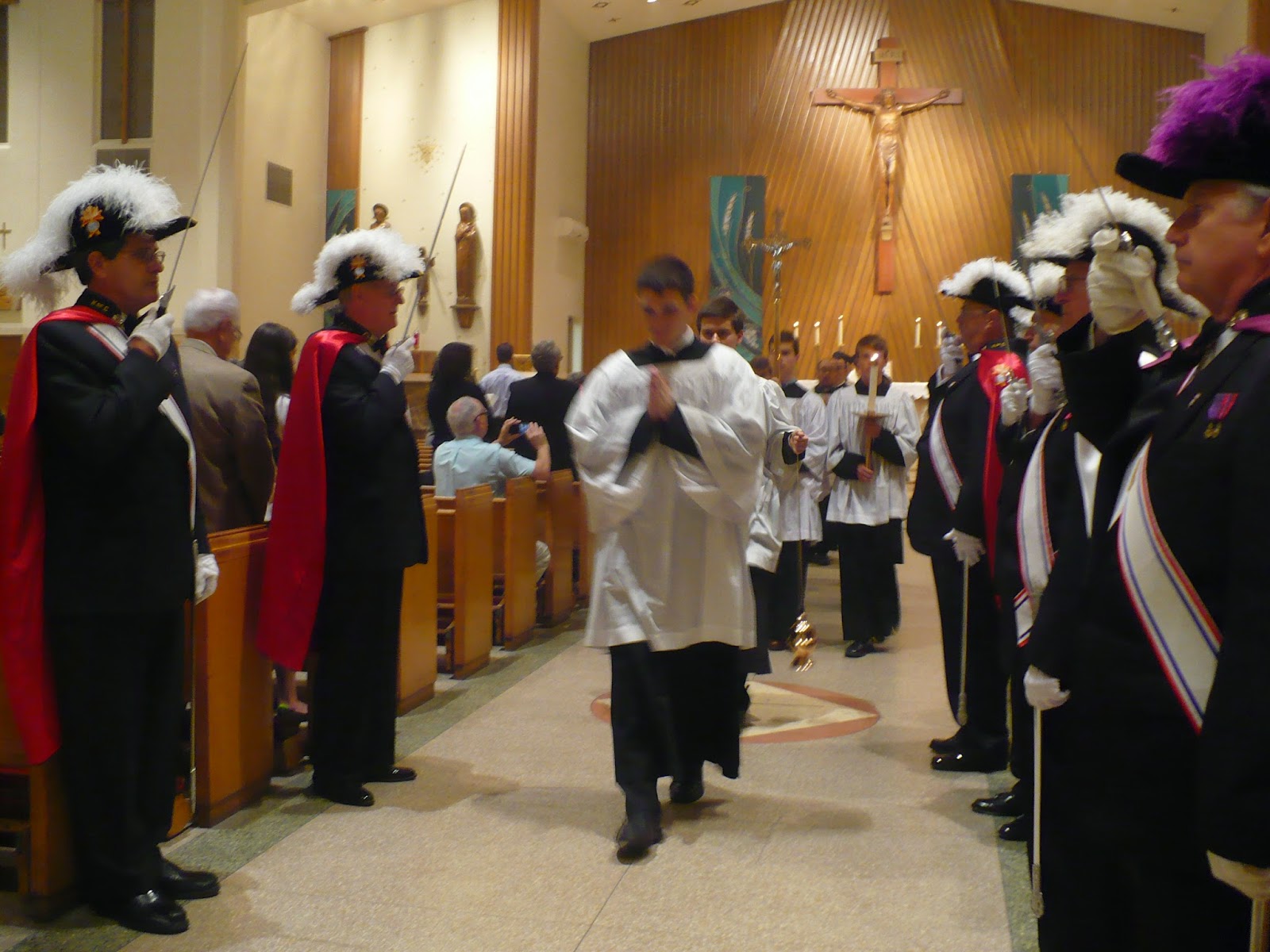 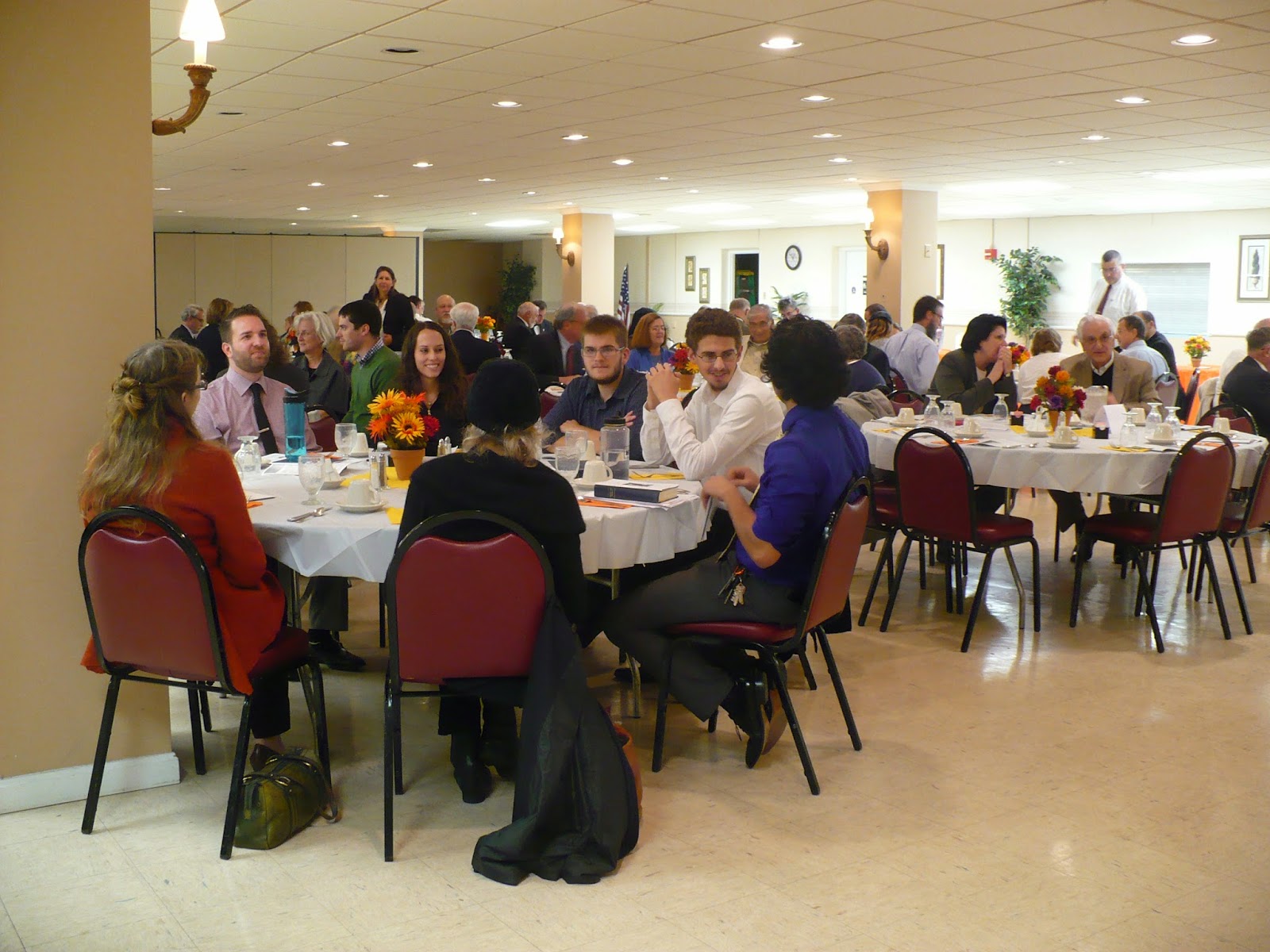 After Mass, at the Seventh Annual Battle of Lepanto Dinner, John Vennari, Editor of Catholic Family News, gave a talk entitled "From Lepanto to Fatima: The Rosary is Our Victory." 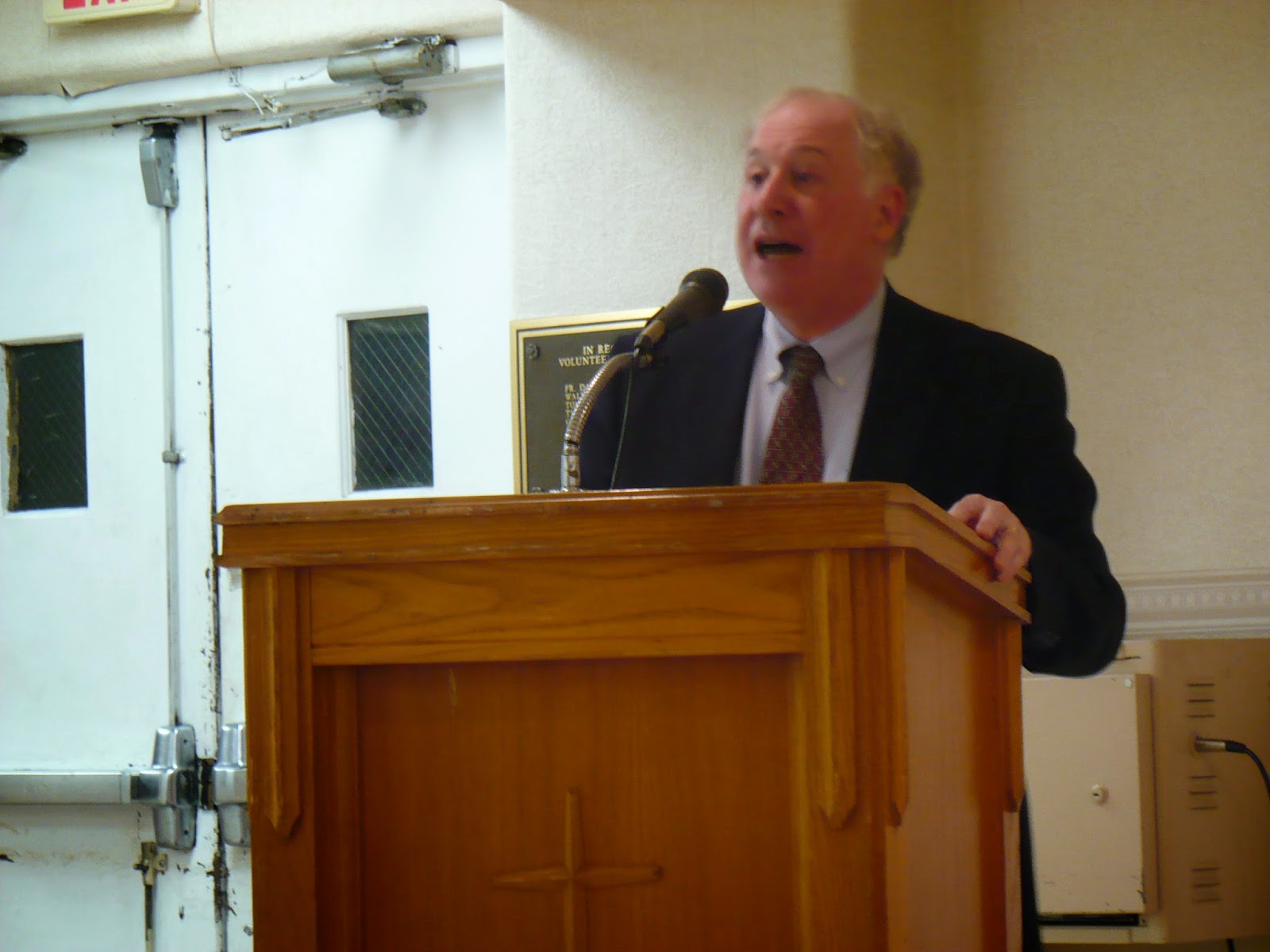 Fred Goldbach, of the Pittsburgh Latin Mass Community, Inc., presented a check in the amount of $1,000 from the PLMC to Canon Todd for the support of the Institute's seminary. 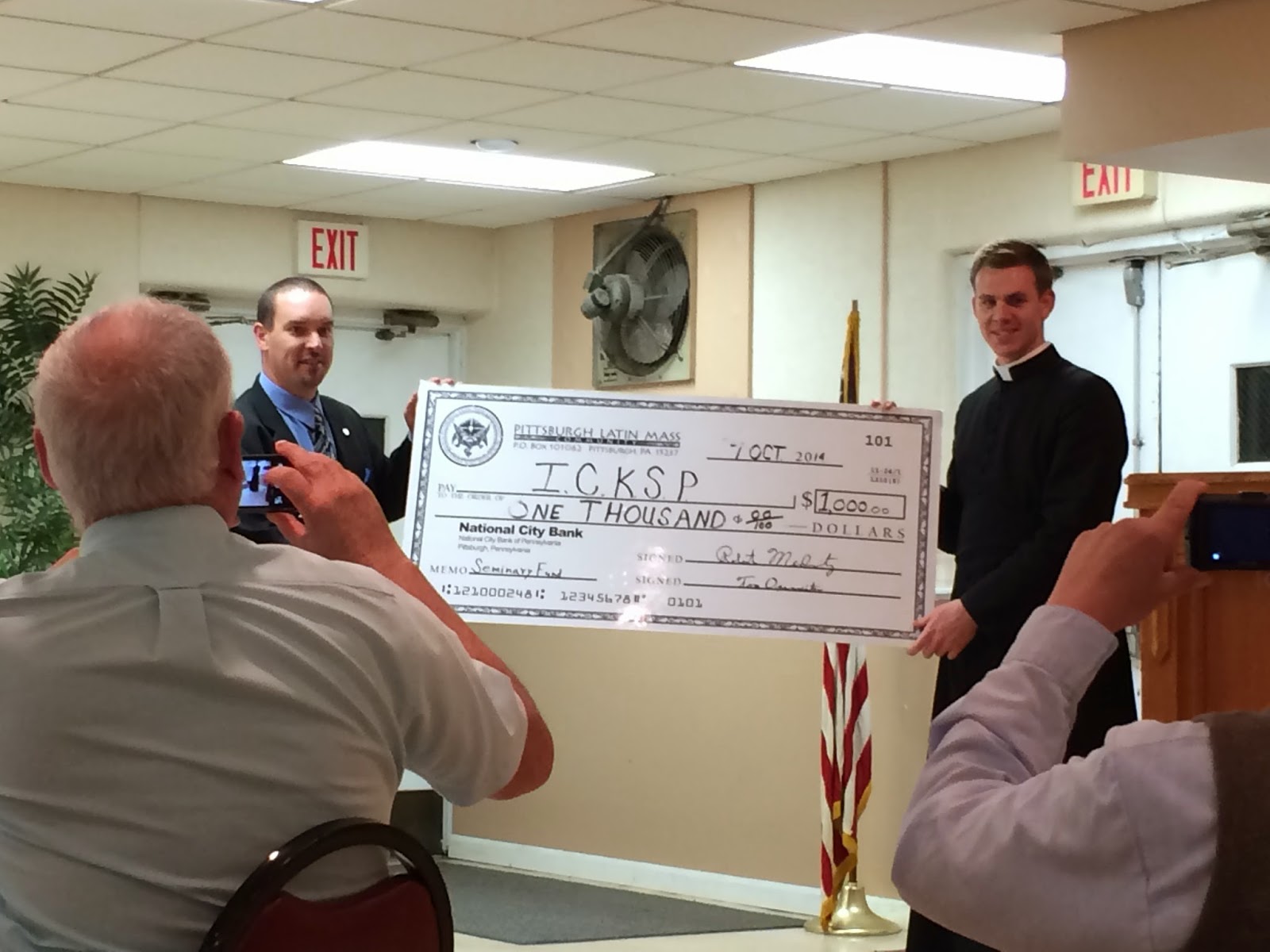 In addition to celebrating the Feast of Our Lady of the Rosary and commemorating the Battle of Lepanto, this annual event serves as a fundraiser for Woodlawn Council's seminary scholarship grant program. Woodlawn Council raised $500 that will be awarded to a seminarian of the Institute of Christ the King Sovereign Priest later this year.
Posted by Administrator at 12:01 AM No comments: