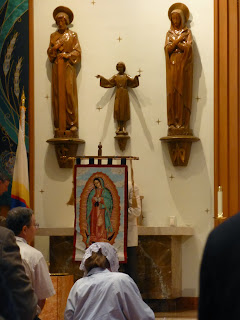 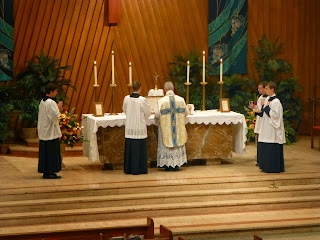 On Monday, 7 October 2013, the Knights of Columbus Woodlawn Council 2161 Traditional Latin Mass Guild hosted a High Mass at St. Titus Church, Aliquippa, to celebrate the Feast of Our Lady of the Rosary.
﻿ 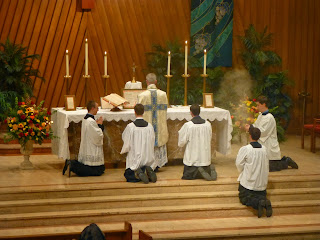 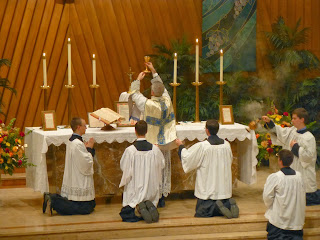 The celebrant was Reverend Canon Matthew Talarico of the Institute of Christ the King Sovereign Priest. 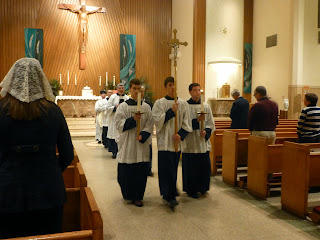 Music for the Mass was provided by the Duquesne University Schola Cantorum Gregorianum, under the direction of Sr. Marie Agatha Ozah, HHCJ.  Dr. Ann Labounsky, organist. 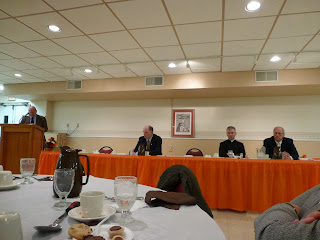 After Mass, at the Sixth Annual Battle of Lepanto Dinner, Dr. Timothy Williams, of Franciscan University of Steubenville, gave a talk entitled Enemy at Lepanto: The Ever-Resurgent Challenge of Islam.

The Pope praised the loyalty of the Knights of Columbus as he received them in audience in the Sala Clementina of the Vatican Apostolic Palace on 10 October 2013.

From the Vatican Information Service.
Posted by Administrator at 12:01 AM No comments:

Pontifical Mass in Honor of Blessed Karl of Austria 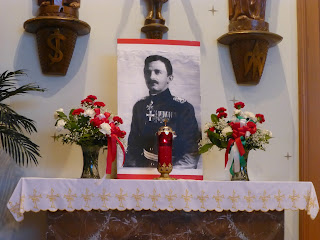 Dinner & Conference
Immediately after Mass in the Church Hall
(Reservations required for dinner & conference.  See below.)

His Excellency, Don Teodoro de Faria
Bishop Emeritus of Funchal, Madeira Island, Portugal, author of a new book about Blessed Karl.  As Bishop of the diocese in which Blessed Karl died in 1922, Bishop de Faria has long been active in his cause for sainthood, and it was he who formally presented to the Holy Father the petition to beatify Emperor Karl at the beatification ceremony in Saint Peter’s Square on 3 October 2004. A native of Madeira, Bishop de Faria was ordained in 1956 at the age of 26, consecrated bishop of Funchal in 1982, and since his retirement in 2007, has been working on his book about Blessed Karl, which he will discuss during his remarks.

Ricardo Dumont dos Santos
Portugal Delegate of the Emperor Karl League of Prayer.   Mr. Dumont dos Santos is the honorary consul of the Federal Republic of Germany on the Portuguese island of Madeira.   His family's connection to Blessed Karl encompasses three generations. His father, Dr. Alfredo Dumont Machado dos Santos, was leader of the Emperor Karl Prayer League in Portugal until his death in 1989.  His paternal grandfather was one of the doctors called for consultation during the final illness of Emperor Karl, and it was he who signed his death certificate.

Sponsored By:
Knights of Columbus Woodlawn Council 2161
Traditional Latin Mass Guild
Posted by Administrator at 11:00 AM No comments:

Blessed Karl of Austria Events in the Northeast -- October 2013 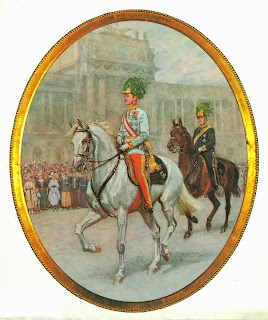 All Masses are Traditional Latin Masses unless otherwise indicated.

Veneration of Relic after all Masses

For additional information about Blessed Karl, please visit
the Emperor Karl League of Prayer website.
Posted by Administrator at 12:01 AM No comments: