Thursday, 7 October 2010, 6:00pm (note the time)
High Mass for the Feast of the Holy Rosary followed by
the 3rd annual Battle of Lepanto Dinner & speaker.

Holy Rosary & Confessions begin a half hour before Mass.

Celebrant:
All celebrants will be priests of the Institute of Christ the King Sovereign Priest

Pursuant to our Holy Father Pope Benedict XVI's Apostolic Letter,
Summorum Pontificum, these Masses will be offered according to the
Missal of Blessed John XXIII, i.e., Traditional Latin 'Tridentine' Masses.

ALL ARE WELCOME
Posted by Administrator at 1:49 PM No comments: 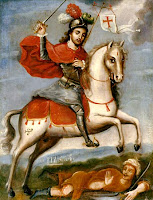 "The General Chronicle of King Alfonso X the Wise reports a miraculous event during the battle of Clavijo, which gave the cult of St. James a dramatic configuration. According to witnesses, Santiago was seen descending from the sky mounted on a white horse, having in one hand a snow-white banner on which was displayed a blood red cross, and in the other a sword... The imagery will present him thereafter as a knight on a white horse, carrying a banner with the Cross of Santiago and wielding a flashing sword. Protector of Christendom, he became Santiago Matamoros, the Moor slayer. ... The restoration of Christendom requires, today as ever, a militant approach to every facet of life, and Santiago is perhaps our best model. Una manu sua faciebat opus et altera tenebat gladium. Work and combat, under Mary’s protection; we should make ours these two lessons of Santiago: constant work and militant attitude in order to defend the principles of Catholic civilization." (The Way of Compostela by Fr. Ramón Anglés)
Posted by Administrator at 8:07 PM No comments: